The Fallout: Wasteland Warfare miniatures game already includes non-combat skills such as hacking computers, picking locks, searching, etc. to give the real Fallout experience; however, an RPG needs to cover any activity and/or experience a world may throw at the characters.

In the RPG, each character has a ‘character mat’ showing locations on which to place the character’s card and weapon cards, plus it has areas for other details about the character too. One main area is the Expertise Skills area where all the skills new to F:WW are listed – this not only allows players to track which skills their character has learned but also shows how proficient they are at each skill – more on that later. (The existing Expertise Skills like Lockpick remain displayed on the cards too so they integrate seamlessly with the miniatures game.)

Before looking at the skills themselves, let’s look at how they work. In the F:WW miniatures game, Expertise Skills work in a similar way to the combat skills such as Rifle and Melee, but only require a successful roll to succeed. In the RPG, the Expertise Skill tests have more depth and function just like the combat skills. In combat, an attack does an amount of damage, the target may have armor that resists that damage, and a target has an amount of health before it is defeated. Expertise Skills in the RPG work the same way, except:

When making an Expertise Skill Test, a success on the Skill Dice automatically gives 1 Impact (just like a weapon with base damage 1 would do in combat), any ‘damage’ icons add extra Impact, and any ‘armor reduction’ icons reduce Resistance. Attribute tests (i.e. STR) use the same system too.

If a Skill Test needs multiple Impact to complete (as Difficulty is greater than 1), the total Impact can often be accumulated over several tests, i.e. the GM says tracking a synth where few signs of passage are shown has Difficulty 3, so each Impact gets the character(s) some way towards enough information to know which direction the target went – this allows characters to use Tracking in multiple places in the area and they will know when they have accumulated 3 Impact – if a character gets 3 Impact in one roll then they have all the info they need straight away. Some tests may require all the Impact to be accumulated in one go, such as persuading a guard to open the side gate later that night as they will not take action unless convinced enough. Some tests may have no effect until all the Impact is collected, i.e. hacking to gain access a computer; whereas, a door will get broken down bit by bit as STR tests to break it down have Impact (until enough is accumulated to totally destroy it).

In combat, weapons are the primary source of Effect Dice, like a Hunting Rifle adding 2 Yellow dice for short range. For Expertise Skills, a character can gain Effect Dice from several sources to aid their attempts. One major source are their Skills themselves. The first time a character gains a skill, they gain 1 black Effect dice for any Skill Tests of that type. Each time a character spends experience points to gain a skill they already know, they gain 1 additional black, yellow or green Effect Dice of their choice. This allows a character to customise their development in a skill – for the Persuade skill, they could be more successful but with the same effect by taking green dice, have the same chance of success but be more likely to well-and-truly convince them when they do succeed by taking black dice, or be better at lowering people’s barriers by taking yellow dice.

Other ways for characters to gain Effect Dice are from assistance (where one character attempts the test and those assisting them roll one Effect Dice each to add to the main test), equipment, Perks, Luck, and any awarded by the GM to represent the situation, a character’s knowledge, the way a character approaches a test, etc.

As with all skills, each Expertise Skill is based on a specific attribute. Characters without a skill can still attempt that skill but suffer a -4 penalty, plus the quality of their success is only ever the most basic.

The skills cover a wide-range of areas from Persuade to Stealth, from Track to Knowhow, from Medical to Repair & Craft. The Knowhow and Repair & Craft skills are each comprised of several skills covering different areas of expertise, such as Survival and Weapons respectively.

Like the wargame, Opposed Skill Tests are used in the RPG when two characters are directly competing and the winner is the character with the most Impact.

Of course, characters also mess up sometimes too and if the Skill Dice shows the X result then a ‘complication’ has occurred.

Overall, the RPG’s Skills System can portray the very-varied world of Fallout by using the same dice system already used in combat. The dice rolls can tell the story of what happened (though the GM can still decide how the outcome manifests if they want too) and the system provides many ways to structure and adjust Skill Tests. The rulebook includes advice for GMs about how to create, adjust and use Skill Tests too.

Next time, we’ll look at the character creation system which is another new area in Fallout: Wasteland Warfare. Until next time, happy wandering in the Wasteland.

You can pre-order the Fallout: Wasteland Warfare RPG Expansion here. 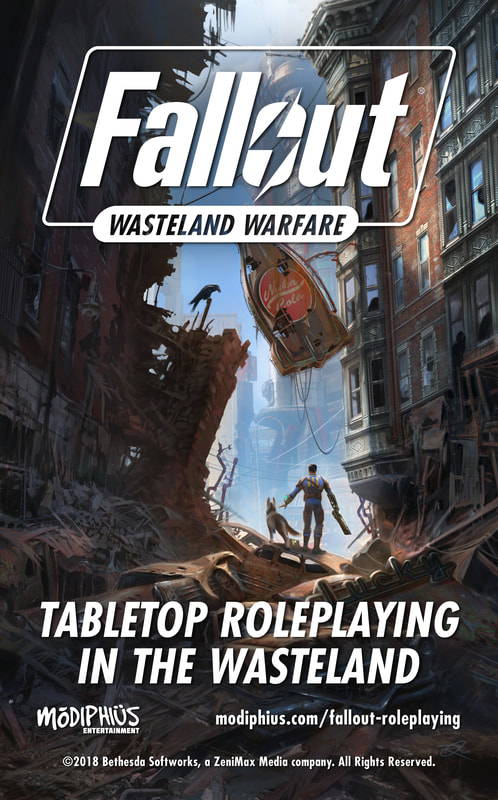