Today, we're starting the first of a series of reveals for the Fallout: Wasteland Warfare rules as we progress through the final stages of development; plus, there's a preview of the awesome sole survivor, Nora, who's going to be in the two-player starter set.

We're creating different 'unit' cards for the sole survivors - one is the basic, fresh out
of the Vault survivor in the starter set, the other has learned the dangers of the wasteland and picked up some more skills and experience which will come with the Sole Survivor expansion set which includes Nate, Codsworth and a version of Dogmeat with goggles! There will be more versions in later releases). Unit cards won't be tied to the male or female miniatures so you'll be able to choose who you want to field in your crew.

Measurement of movement and ranges is one of the mechanics that we have taken a contemporary approach towards. I remember using my school ruler for early home grown battles with 28mm fantasy battles made up of Citadel and Ral Patha minis scavenged from bring and buy stalls at local cons. Discovering the rusting old tape measure in the garage was a major moment! More recently we've seen a host of movement sticks and manoeuvre templates on tabletops.

Each Fallout unit card includes the S.P.E.C.I.A.L stats for its unit giving us loads of great options for gameplay; however, we wanted to reduce the amount of numbers on the cards to simplify the information, so James hit on the concept of coloured ranges. The coloured ranges are used for all distances in Fallout: Wasteland Warfare, and the two-player starter set comes with a number of coloured range sticks of specific sizes.

Measuring movement distances is simple as each unit card shows two colours - one for standard movement, and one for charging. For example, your Super Mutant unit card shows yellow for their standard movement which can be used for any movement; however, the unit card shows green for their charge which is longer than yellow. Each model gets two actions so you could move a Super Mutant in this unit yellow and then yellow again, or you could move them yellow, and if it's now within green distance of an enemy, charge with your second action. The sticks show the maximum distance so you can move up to any point along that range stick, and it's easy to use them to move around objects using marked increments on the sticks.

Measuring weapon ranges is equally simple too. Attacks are all shown on small cards such as the combat shotgun or plasma rifle. Each weapon has a short range and a long range, and a coloured bar for each shows which stick is used. To measure a shot, you just grab the sticks shown, place them end-to-end, and you can immediately see the ranges. For example, your combat shotgun shows red for short range and blue for long - place the two end-to-end (red then blue) and you can see what falls within your combat shotgun's blast. The effect dice rolled for each range are shown underneath the coloured range bands. So, for the combat shotgun, if your target is within the red stick (short range), you roll the effect dice shown under the red bar; if your target is within the blue stick (long range) then you roll the effect dice shown under the blue bar.

As well as movement and weapon ranges, colours are used for all other measurements in the game too such as awareness, command, blast damage, distances during set-up, determining falling damage, etc. This simple system speeds up gameplay and keeps the most important numbers on the unit cards clear and easy to read.

We're currently 3d printing and mastering the first wave of sets. Once these are signed off by Bethesda we'll be painting a set up and showing them and some demo games off with full video battle reports.

Hopefully you have enjoyed this first peek into the Fallout: Wasteland Warfare rules. Keep an eye on the blog for regular updates and sneak peeks as we run up to the November release. 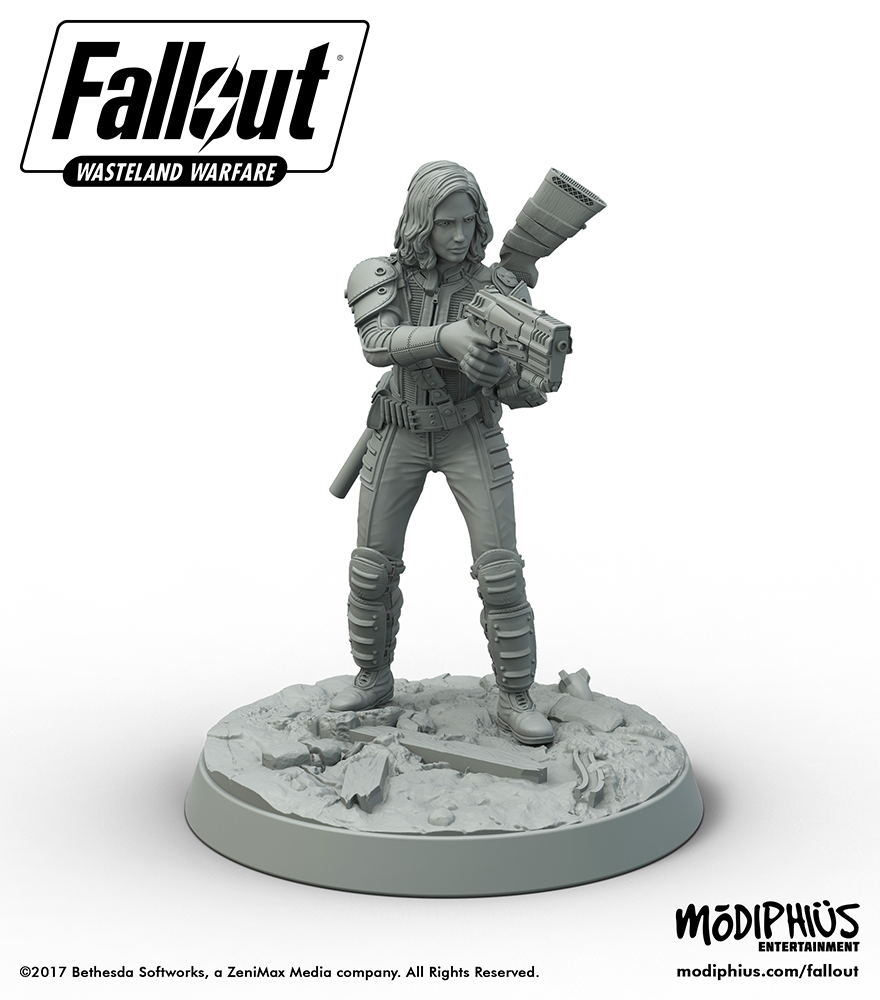