Welcome to the second developer blog for Elder Scroll: A Call to Arms! We’ll be aiming to release an update for you about twice a month as we get closer to our release (which should be sometime around the Festival of Blades for those who follow the Tamriel calendar).

Over the next few months we will be previewing the rules, miniatures and accessories that you will see in our first Chapter - Civil War (yes, that does mean we also have further Chapters planned as well). We’ve already released some images of the miniatures in our launch sets, which can be seen here along with shots of the plastic sprues on the Call to Arms Facebook page. The Civil War chapter will take us through to late summer 2020, after which we will launch our second chapter, tentatively titled Steam and Shadow. But more on that later….

The Adventurer faction gets expanded with another two sets of miniatures that give you more heroes and followers to choose from when you build your adventuring parties for Delves. You can also use these in Battle Mode as well, as you fight the Imperial or Stormcloak forces on behalf of a Jarl, or perhaps you fight for your own reasons in the Civil War. We’ll also have adversary versions of the cards if you fancy leading a force of Stormcloaks to prevent your ancestor’s bones being disturbed, or perhaps a force of Imperials raiding a dangerous camp of outlaws. These will be our first releases after the core set and we’ll look at these in detail in our next blog. 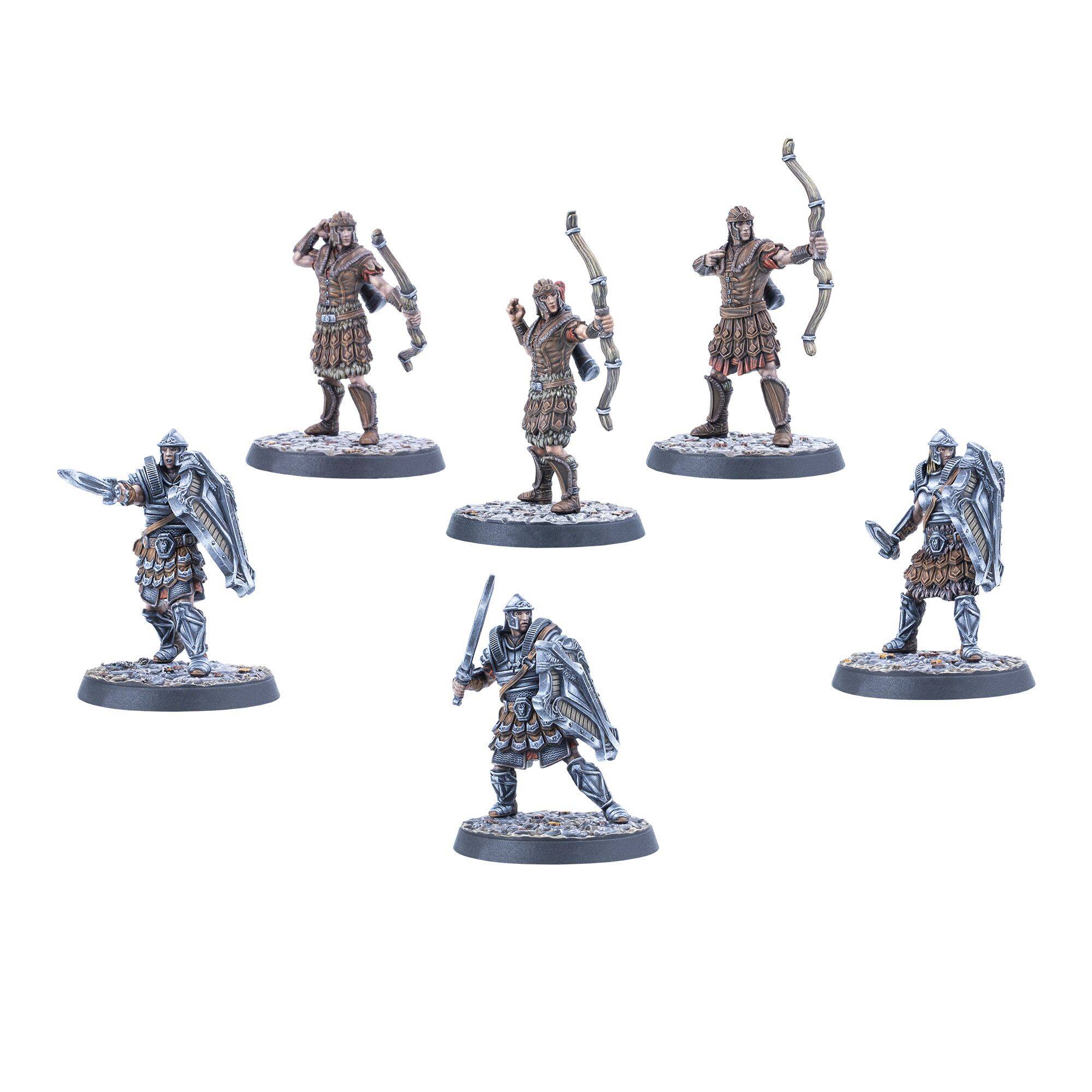 So, what else can you expect in the rest of the Civil War wave? Well, as the name suggests, there is a strong focus on the conflict between the Stormcloaks and the Imperials. The initial release for both factions gives you the core forces that set the tone for the armies. We looked at these in the last blog. Each force also gets a troop box and a hero box to expand the armies, the Stormcloak Skirmishers and Imperial Legion Reinforcements. We’ll look at two of these in detail in a later blog post.

This system of core box, troop box and hero box should be familiar to players of Fallout Wasteland Warfare and gives a sensible, modular approach to force collection.

We’re also adding more of the deathless Draugr to populate the tombs and ruins of Skyrim. The Draugr Guardians set will be available in plastic and the Draugr Ancients, with the fearsome Deathlord will be coming in our high detail resin. 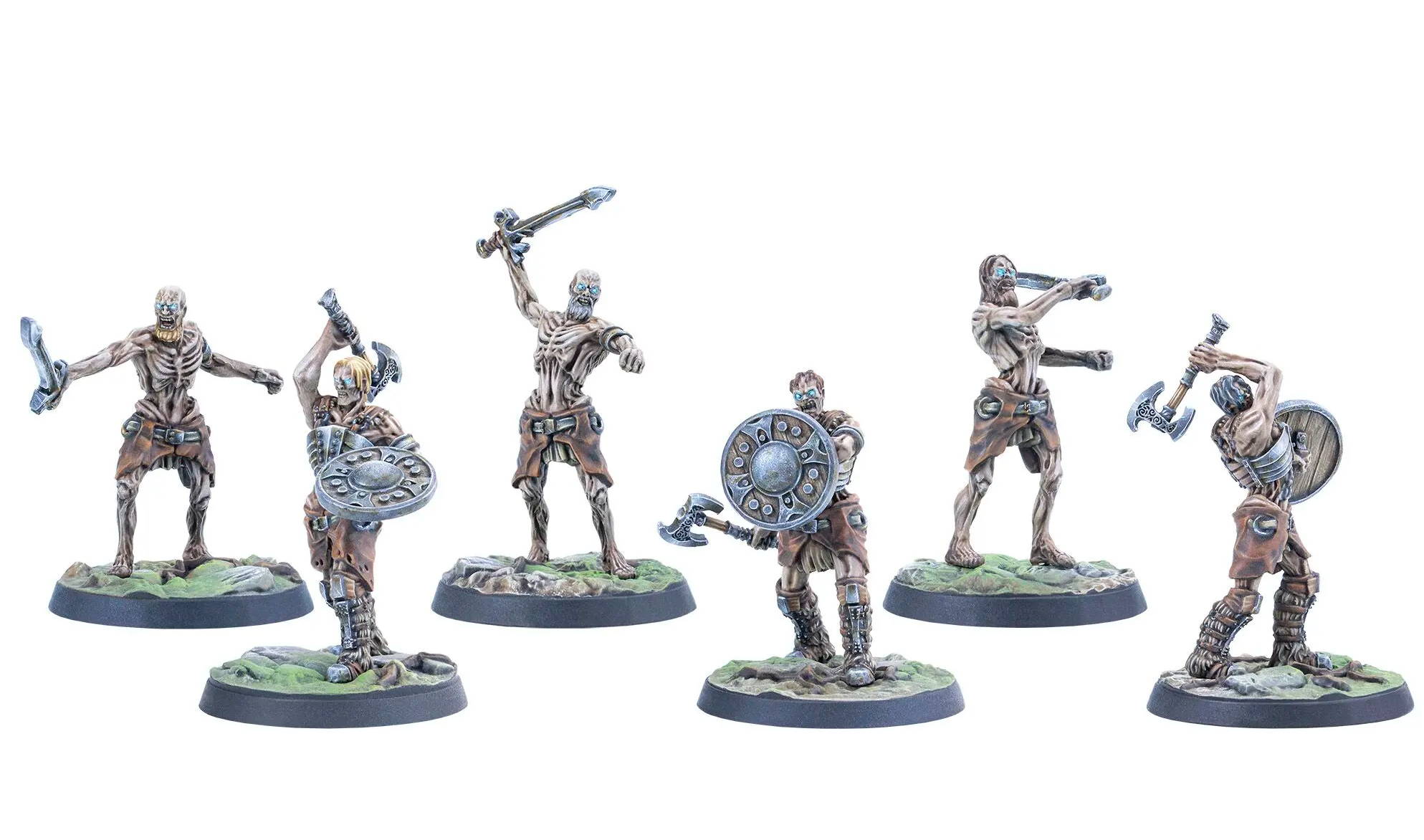 We’ll also be releasing several other products to support the game through the first chapter. The Civil War Card Pack, due out the month after launch, gives you all the cards that you will need to support the miniatures releases in Chapter one, and expands on the game play experience from the core rule set with new Items, Spells, Traps, Enchantments, Quests and Events. If you pick up the card pack you will have everything you need to support all of our miniatures releases right the way through the Chapter.

We also have the Civil War Campaign Pack due around the same time. Our in-house development team have been hard at work crafting more than 18 new scenarios, both for Delve and Battle Mode, centred on the events of the Stormcloak Rebellion. Delve for the Jagged Crown, fight at the Battle of Whiterun, claim Holds for your faction and lead them to a final assault on your opponent’s capitol. We’re expecting this to be a great expansion to the game and will set a model for the core game play expansions we’ll see for each Chapter. 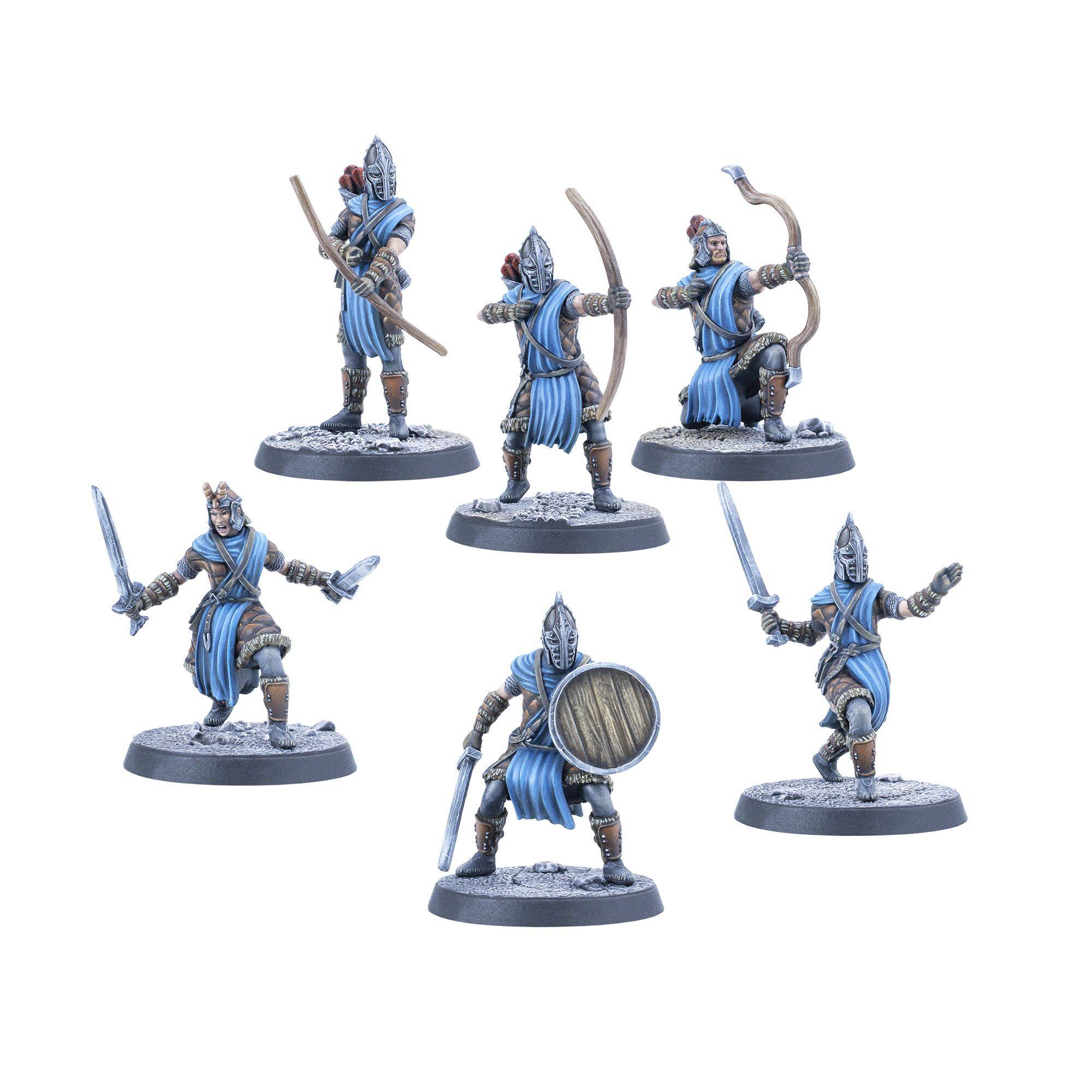 Alongside the Civil War Campaign is our first large Narrative expansion. You’ll be able to take your Hero from a lonely wanderer to the champion of their own hold as they fight to protect their village from enemies, gain favour with the Jarl and stake their claim upon Skyrim. This expansion sees a focus on solo or co-operative play and introduces new story and game play elements such as campaign actions, resource management, troop recruitment and training, settlement building and defence, hero and unit development. See your small band grow and develop from mission to mission and follow your Champion’s own persistent personal quest. Chris has been working hard on this as a personal project, and it brings his vision of narrative play right to the forefront. We expect this to be arriving in the summer.

With all those new forces and great scenarios and narrative systems to play, we need something to fight over. So, our digital Dwemer have been hard at work sculpting some amazing Skyrim themed terrain. To start off with we will have resin upgrade packs for the markers and tokens in the Core Box. These include things like chests, puzzle pillars, levers and standing stones to replace the treasure and objective markers, as well as some other goodies such as the spiked pit trap, a magical glyph and trapdoor markers for all those Secret Paths. Alongside this we have our Bleak Falls Barrow Arches set which provides the iconic Nordic Arches that feature outside so many of the ancient Nord Barrows. Along with some scatter terrain these modular arches can be used together for a magnificent and spectacular complete arch or broken down into component pieces to provide some scatter terrain. The Double-Sided Gaming Mat features a Draugr tomb floor on one side, and a bleak Skyrim wilderness on the other. Later in the Chapter we also have our dungeon scenic sets that will include a Puzzle Door, Nord Tomb walls (with sleeping Draugr), ancient sarcophagi (with more sleepy Draugr), braziers and funerary urns.

To back of all of this up we will also be releasing community support and organised play packs, much as we do already for Fallout. These will be available for stores to run themed events with special, exclusive versions of cards and other goodies available. We’ll have one available at launch and our first themed pack available mid chapter.

So, that’s the plan for our first chapter, Civil War. It’s not the last chapter we are looking at. Our very tentative plan for the Skyrim Age (as this series of chapters is called) continues with Steam and Shadow launching around September and then at least three further chapters following through 2021. We’ll be introducing more factions as we move into each successive chapter, but also providing support for the existing factions as well.

Next time we’ll take a closer look at our first two expansion sets, The Adventurer Allies and Adventurer Followers.