Welcome to the latest development blog, which is going to start looking at what it means to be a hero in the Fallout: Wasteland Warfare game. We're also giving you a preview of the massive Super Mutant Behemoth - and yes he does have a shopping cart on his back!

In Fallout, some characters and creatures have an edge over the rest - they have that little bit of luck, or manage that extra burst of action just when it’s needed. In Fallout: Wasteland Warfare, these are called Heroic units. Any unit can be made Heroic, although they cost more to put on the battlefield - to make them Heroic, a Heroic card is placed above their Unit card and this shows all the extra abilities it gives models in that unit. So, what does a Heroic unit bring to the fight, you ask? We will get to that but, first, it’s important to take a look at the Action Point system.

In Fallout 4, the player has Action Points (APs) which can be used primarily to move further and to use the V.A.T.S system so they can target and attack more times than they would compared to doing so in real-time - Fallout: Wasteland Warfare uses them for the same effects. Any model may earn APs - they are not too common, but Heroic models have a much better chance of gaining APs when they are activated. The most common way to earn an AP is via the Skill dice, as several results on the Skill dice give an AP; however, being equipped with some chems, equipment and perks can give some APs too. Each AP can potentially be spent to give a model a Quick Action - which are just like regular actions such as Move, Shoot, Lockpick, etc. - but each at a small penalty. Which activities a model can spend APs on is dictated by the Action Point Use icons on their cards and each icon can only be bought once per activation which gives some limits. Most models can only spend an AP to Prepare (shown by having the corresponding Action Point Use icon on their unit cards), but some units have access to more, such as Mutant Hounds who also have an Action Point Use icon on their unit cards for Movement. Yes, the Mutant Hounds are frighteningly fast, but some can really catch you off guard with that occasional burst.

With that in mind, let’s return to the Heroic card and look at two of the abilities it conveys. The first ability is V.A.T.S. - when activating a Heroic model, the player rolls a Special effect dice which may give them up to 2 APs. The second ability is that the Heroic card shows Action Point Use icons for Movement, Attack and Expertise (which includes lockpicking, computer hacking, etc.). Therefore, a Heroic model is much more likely to have APs to spend plus gets a wide array of options to spend them on too (but still with limits).

The abilities from the Heroic card don’t end there either as it also gives Heroic models access to Luck and Criticals. First, let’s look at Criticals which are powerful attacks. Each time a weapon hits an enemy, a Critical Point (CP) is added to its weapon card. When there are enough tokens (depending on the weapon), the weapon can use its critical effect. Just like Fallout 4, criticals always hit (so long as the shot is possible) and most add extra base damage, extra effect dice, and/or some have special effects too. Several results on the Skill dice also give a bonus CP too. If a model does not have the critical icon, they do not use Criticals or gain CPs.

Luck is a limited pool of tokens for a unit (based on their LUC stat) which can be used to slightly nudge outcomes and events. A Luck token can be used for one of four possibilities:

All Luck tokens get used after seeing the outcome of an event - so there’s no need to spend one only to find out you didn’t need to as that’s just annoying for players. Why adjust a roll by 2 and not a re-roll? There are several reasons for this - re-rolls are very powerful which is too swingy - if a dice was a solid success (i.e. needed to get 9 or under and rolled a 3) then it shouldn’t get totally overturned. Also, it’s annoying for players who have just done well to have it scrapped - this is especially the case when you’re facing a powerful model and, for once, they miss - if a player can just re-roll, then they become very hard to defeat until their ‘luck shield’ is down. However, luck is not guaranteed - it is luck after all. When you want to use Luck, you take one of the tokens and flip it - if it lands Luck-side up then it takes effect, but there’s no effect if it lands Luck-side down. (Players that prefer rolling, rather than flipping, can use one of the effect dice, or they can flip a coin - anything that’s 50:50). We'll also have a sets of special Vault Tec approved Luck dice.

As if that’s not enough, Heroic models also get one extra Health too. The end result is that Heroic units have an edge but, like everything in the Wasteland, it’s not guaranteed. That’s an important factor within Fallout: Wasteland Warfare - some models may get an extra action, or use Luck to avoid the shot that would have killed them, but not for certain - the extras are all bonuses in addition to their regular abilities and actions.​

Note that some units in Fallout: Wasteland Warfare have some of the abilities on the Heroic card - there are Units which have a Luck icon on their cards without needing to be Heroic, some equipment gives APs or Action Point Use icons, etc. However, a Heroic unit gets all of the above - they just cost more caps (points) when creating your team.

There are more ways to customise your team too - one model on each side can have a Leader card which gives other abilities, and we’re trying out similar cards that give creatures extra abilities too, so you can have a Glowing Radscorpion or a Legendary Deathclaw to change up the power levels. More on those in later posts! 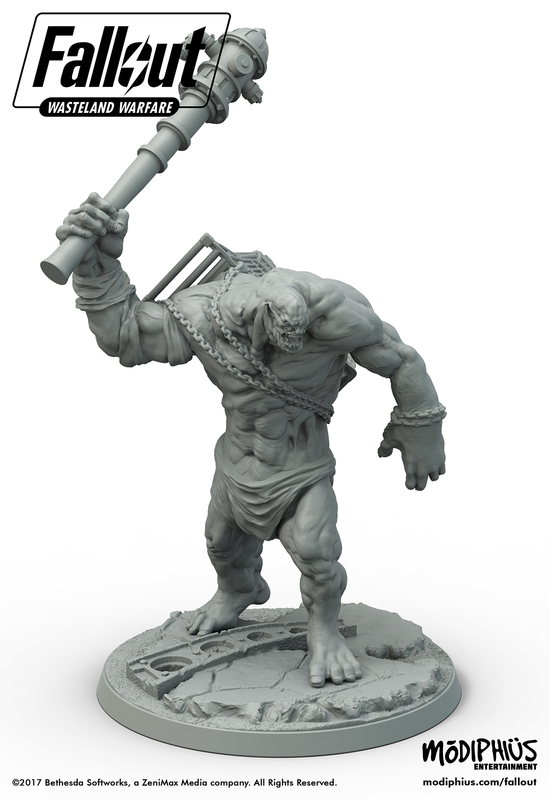