In this latest Fallout: Wasteland Warfare development blog, we’re talking about how the Fallout SPECIAL stats are integrated into the miniatures game and revealing the sculpt for Piper Wright (on the right) who will be part of one of the many sets of extra characters to add to your forces. Piper’s known for attracting trouble and you can be sure that isn’t going to change!

​
During Fallout: Wasteland Warfare, players will attempt activities such as shooting, lock-picking and melee. The result is determined by the roll of the d20 Skill dice plus usually one or more Effect dice based on the weapons, gear and/or abilities. (We’ll be talking about the Effect dice next time, and will look at the various skills used to interact with the wasteland soon too.)

Every model has a set of skills which are represented by icons found next to each of the S.P.E.C.I.A.L. stats on their unit card. For a skill roll to succeed, the result rolled on the Skill dice must be equal to or lower than the value of the stat which the relevant icon is next to (after adding or subtracting any modifiers). If a model does not have a specific skill icon of their unit card, it can not make a skill roll of that type,

A Brotherhood Field Scribe does not have a Heavy Weapons skill icon which means they can not make a skill roll to use Heavy Weapons.

A handful of bonuses and penalties can adjust the value of the skill that the player needs to roll equal to or less than.

Typically modifiers would be for cover, using a ranged weapon in melee, acting in reaction to another, as a result of using luck - in practice most skill rolls will not use modifiers.

The adjusted skill value can not go lower than 1 so a model with a relevant skill always has a chance.

A Brotherhood of Steel Paladin receives a +1 bonus due to a long scope added to their rifle, but also a -2 penalty because the target is in cover; therefore, a total -1 penalty is applied to their rifle skill of 6. This means the Paladin’s adjusted rifle skill value is 5, so they need to roll 5 or lower on the Skill dice to be successful.

Also, not every unit uses the same stat for the same skills. This allows us to create even more variety amongst units and bring out the unique traits of characters and factions.

Piper doesn’t have the toughest physique but she is agile and that allows her to last in combat - a tough but not agile Super Mutant could last by taking the damage whilst Piper's Agility allows her to survive. As a result, Piper uses her Agility stat for her Health; whereas, more physically tough units use their Endurance stat for their health. Whilst Piper’s Agility serves her well for combat, her low Endurance means she is more susceptible to things like poison effects than the units whose Endurance is higher than hers.

We chose this carefully so the S.P.E.C.I.A.L stats can be meaningful in gameplay. The world of Fallout has such massive variety that the steps in capability need to be subtle, whilst remaining relevant. We need to create a situation where lots of variety can exist without some units being so far superior to others that normal units become ineffective or even redundant. A person with a gun is still a threat even if untrained, and even power armour will eventually succumb to enough minor threats.

The S.P.E.C.I.A.L stats primarily range from 1 to 10. If a d10 was used for skills with these stats, a skill of 1 would be almost useless at 10% whilst a 10 would be too powerful at 100%. It would result in most units ending up with stats in a narrower middle range in order to make them fun to play and not be over-/under-powered and this would lose the unique differences that make them so cool.

The d20 in Fallout: Wasteland Warfare allows us to have the range of 1-10 numbers but the number of available faces means we can have several 1s - so that a stat of 1 actually has a 25% chance of success - as well as some X results (which always fail) -so a 10 will always have a maximum 85% chance. This system makes the full range of stat numbers useful, whilst each additional point in the stat still gives more chance of success.

Next week we’ll talk about the Effect dice that are used in conjunction with the Skill dice, how one simple roll gives you the result of each action and what extra abilities are unlocked for heroic units that allow them to really shine on the battlefield. We'll also be starting to unveil more minis in the build up to the launch of the pre-order later in August! 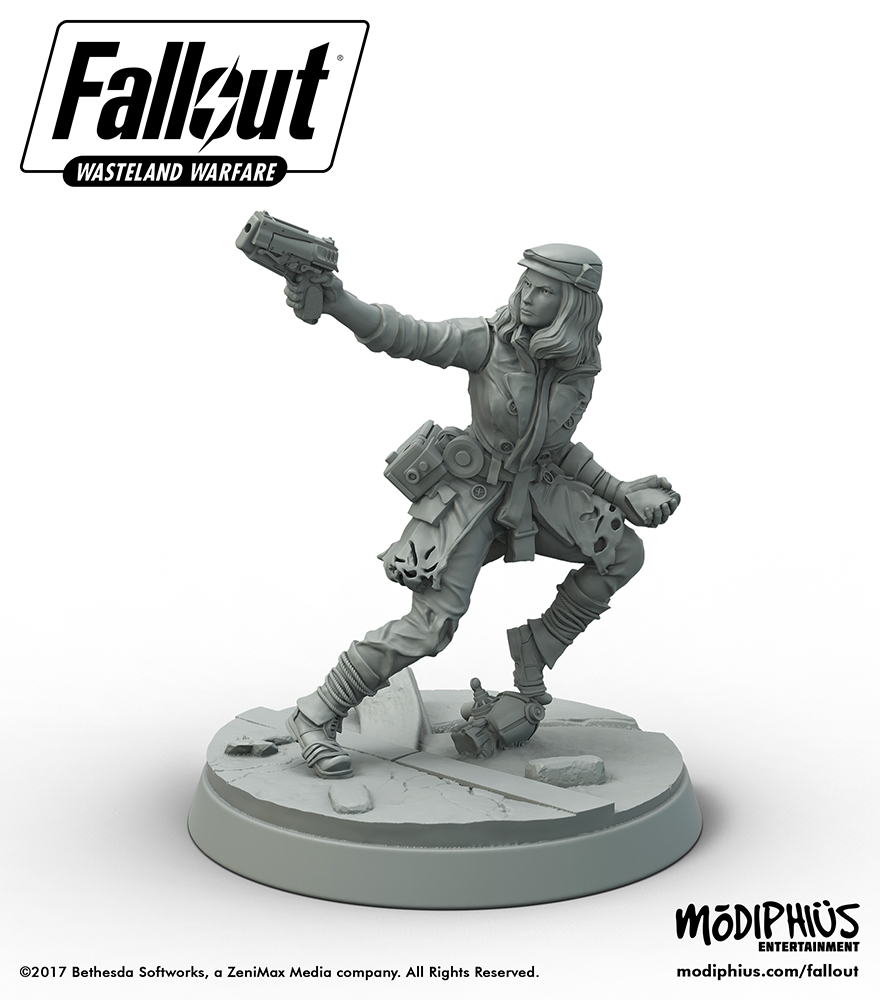